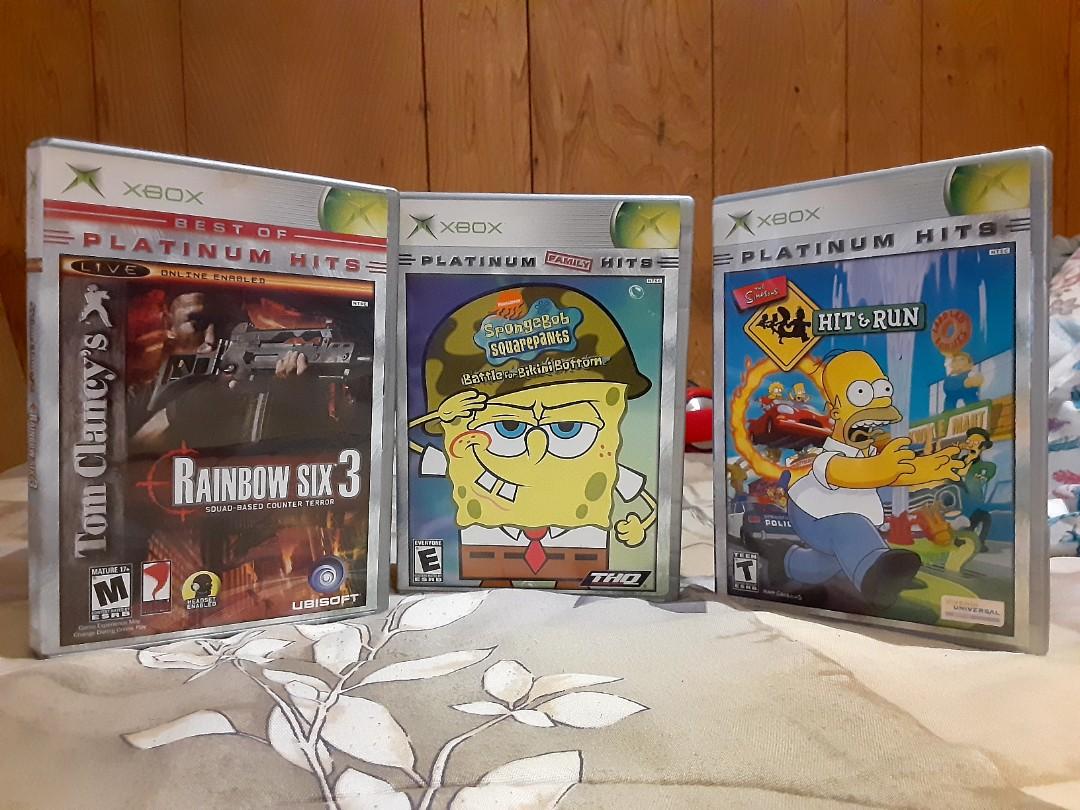 I've got three of the most smashing games that came out of XBOX. (Simpson's is a hard one to find) THE SIMPSONS HIT AND RUN Disappearances, hidden cameras, crop circles -- Springfield has taken a turn for the weird lately. Homer decides to follow a mysterious black van and unravel the mystery! Fun mission-based driving levels take you on an interactive tour of Springfield Pick up hidden power-ups that will give you a chance to relive 14 seasons' worth of funny Simpson-style action Events will set off hidden animated gags just like you'd see in actual Simpsons episodes Fun and funny multiplayer driving modes for up to 4 players $50 SPONGEBOB SQUAREPANTS: BATTLE FOR BIKINI BOTTOM SpongeBob SquarePants returns for more 3D platform action in this game starring the characters from Nickelodeon's top-rated children's program. SpongeBob must once again save the underwater world of Bikini Bottom from the power of the plotting Plankton. SpongeBob will not be left high and dry in his quest, however. Joining the cause are close friends Patrick StarFish and Sandy Cheeks, each of whom is playable and offers distinct moves and abilities. As players pursue Plankton, they'll be able to perform such heroics as tongue-sliding down a mountain, bungee jumping off cliffs, or riding along the watery depths from inside a cruise bubble. $35 RAINBOW SIX 3 Track down a hidden neo-fascist organization in a race against time to stop their evil plot Travel from the Caribbean to Rio De Janeiro to London in a desperate effort to stop a psychotic doomsday plot In 15 exciting single-player missions, you'll use real counter-terrorist tactics and military weapons Over 50 weapons, from handguns to rocket launchers, as you battle in 30 different Specialist modes Defeat a plot to destroy the world -- one takedown at a time! $20 Pick up at Dixie and Bloor/mississauga Shipping available at buyers expense PM me for any comments or questions No reviews for @edza12

Reviews are given when a buyer or seller completes a deal. Chat with @edza12 to find out more!