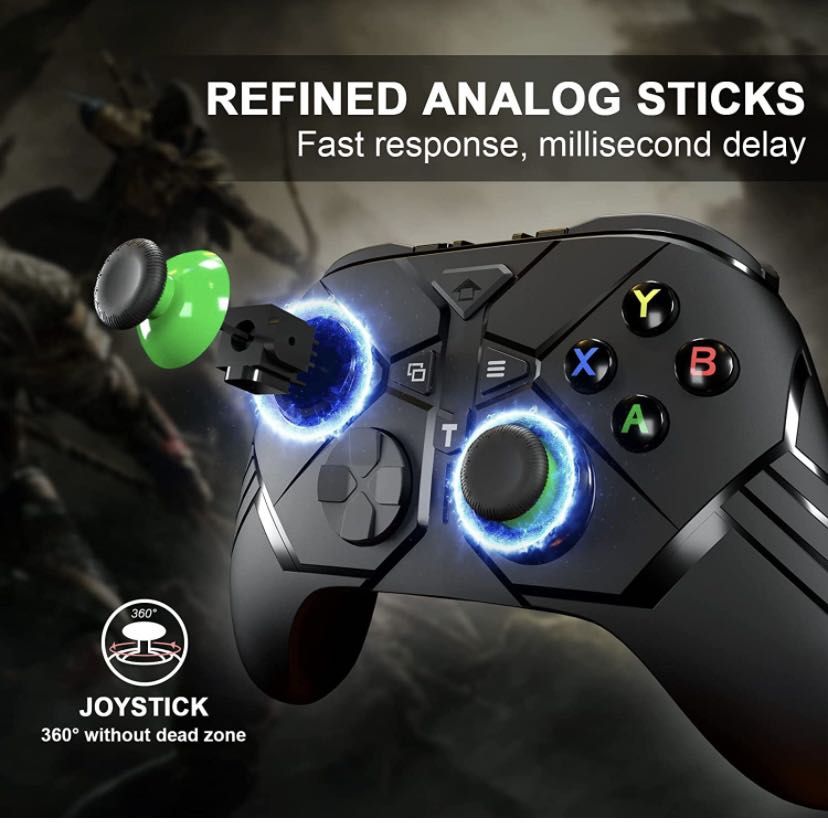 WIDE COMPATIBILITY】 It is not the original controller, but the quality is the same as the method of use. Xbox 1 wireless controller perfectly compatible with xone, xone x, xone s, xone elite, xbox Series S, Xbox Series X, and Windows 10. 【Programming Buttons & TURBO】The back of the controller has two mappable buttons. This function only can work for action buttons(ABXY, LRZLZRL3R3). You also can customize the TURBO button, which make it easier to win an arcade or action game. The speed is 8 shots/s. 【BEST GAMING EXPERIENCE】 The Xbox controller has built-in dual vibration motors. Which bring you different vibration effects according to the game scene. To make you feel immersion in the game, 360°joystick which allows the controller to simulate a large-angle linear rotation, bringing a better gaming experience. 【LATEST 2.4G WIRELESS TECHNOLOGY】 2.4GHz wireless connection, 8-10 meters receiving distance, stable connection signal. The Xbox controller has a strong anti-interference function. It can connect up to 2 wireless controllers at the same time. 【LONG WORKING TIME】Built in 600mAh rechargeable lithium battery, this Xbox Wireless Controller can be fully charged within 3 hours with the included USB charging cable, and then you can enjoy up to 6 hours of game time. No headphone jack. 2.4G Wireless Xbox One Gamepad 2.4GHZ wireless technology, the effective distance is about 30 feet. Features: 1. Controller for All Xbox One Models: The wireless game controller is fully compatible with Xbox One, One X/S, and Xbox Series X/S consoles and also supports PC(Windows 10/11). 2. Double Vibration: Built-in double shock feedback motors, perfectly fit for racing, shooting, fighting, and sports games, enhancing game experience. Bring you a consistent and maximum comfort gaming experience. 3. Programming Buttons: You can customize any action button to assign to the programming button, and the programming button can obtain the corresponding function. 4. Turbo features: With the amazing turbo function, there is no need to press the buttons many times, and still could win the game easily. It could also extends the service life of the buttons by reduce the frequency of pressing buttons. 5. Screenshot: Have a screenshot function that records your perfect moment during the game so that you can show it to your friends and share your happiness. 6. High Performance: The buttons respond sensitively and the control is a handy design for long games session. 7. Large capacity battery: Built-in 3.7v 600mAh large-capacity lithium battery, you can enjoy 6-10 hours of game time after charging for 2 hours. 8. Without the 3.5mm audio headset jack. Can‘t support the audio. Connection: 1. Plug the receiver USB into the host. 2. Press the button on the receiver. 3. Press the home button on the controller. (The controller is in sleep mode) 4. Press agian the home button. (for pairing) Packing List: Controller *1 Receiver *1 Type-c cable *1 Manual *1