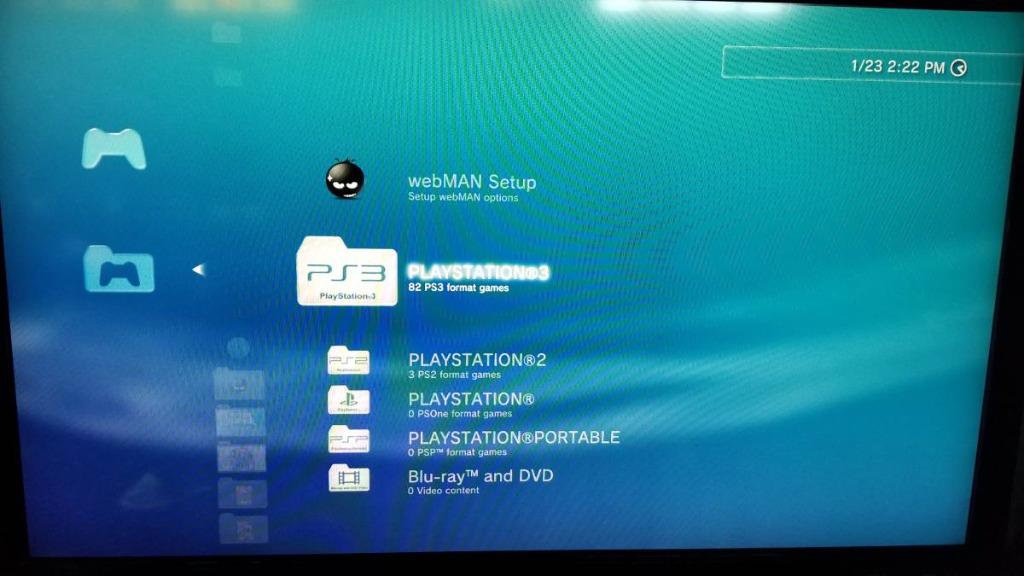 Selling a modded PS3 phat with a generous amount (80+) of games installed. PS1, PS2, and PS3 games all playable, just go into Webman, pick the game, load from XMB and play. Controller, hdmi, charging cable will be included.. PS3 was mainly used for fighting games. Also please read the disclaimer at the bottom section of the ad, and actually do take time to reading it, very important. Modded PS3 Phat 1TB ------------------------$180 Also have another 2 modded PS3 for the following prices: Modded PS3 Phat 500GB ------------------------$130 Modded PS3 Phat 250GB ------------------------$80 Condition is very good and in working condition. DISCLAIMER: It is assumed that the buyer knows what they're doing by purchasing a modded PS3. I have personally tested the PS3 to ensure that it still works and that the downloaded games will run and play normally. Once the PS3 has been purchased and is in your hands, I will not answer anymore questions such as finding ISOs online, installing DLCs, homebrews, emulators, PSN games, etc. It is your responsibility from that point onward to dispel any doubts and questions by doing research online and looking on YouTube and Google for answers. I've already given enough of a general overview on this ad alone. If you then decide to: install other mods, homebrew; attempt to tinker with some of the settings and that potentially something unexpected happens, or if you decide to not take any precautions to go online and then end up getting banned. Those are NOT my problem, and it's NOT my responsibility to deal with those issues, since you attempted to do something without looking online as to what consequences may occur as a result of said action(s). Lastly, please bring EXACT change, I won't wait for you to grab your cash at the ATM, do that BEFORE coming to pickup the PS3. Tags: fighting games, fgc, ps3, pc, ps4, qanba, madcatz, arcade, tekken 7, soul calibur 6, street fighter, guilty gear, blazblue, evo, dbfz, granblue fighting versus, Japanese arcade, marvel vs capcom, bandai Namco, capcom, Namco, arc system works, tekken, dead or alive, modded ps3, ps3 mod, ps5, xbox, orignal xbox, xbox series x, xbox series s, xbox one, xbox one x, xbox one s, video games No reviews for @happogahara

Reviews are given when a buyer or seller completes a deal. Chat with @happogahara to find out more!