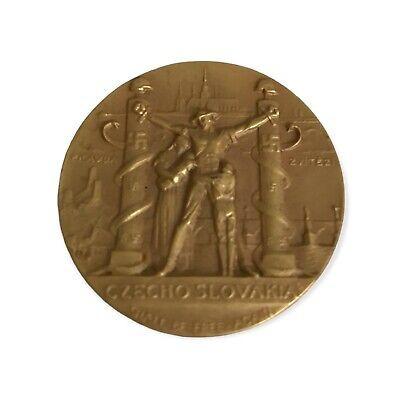 RARE 1939 New York World's Fair Bronze Czechoslovakia "Shall Be Free Again" Medal. Medal is 1 1/2 inches in diameter. Medal is in fine condition. Auction scan (1) shows heroic figure, the arms shackled to two columns marked with swastikas and capped with war helmets. Two snakes slither from the sides coiling upward around the columns, their heads poised to strike at the manacled hands. At front right, a boy clings to the giant's waist. At left, a mourning mother with babe in her arms. Below, Czechoslovakia/Shall Be Free Again. At rear, church, school and bridges. Pravda - Zvitezi. Auction scan (2) shows reverse of medal is almost exact duplicate of the reverse of the 20 korona coin comemorating the death of President Masaryk, the only difference being that the 20 K. over shield is replaced with March 15, 1939, the date of Hitler's entry into Prague. This magificent medal was stuck for the Czechoslovakian Consulate by the Medallic Art Company, and was distributed to sympathizers who contributed to a fund raised to continue the Czechoslovakian Exhibit at the Fair, after the Government had been destroyed by the nazi invasion. The sculptor was Mario Korbel. Regrettably, its elaborate design did not allow space to mention the New York World's Fair, for which it was created. Reviews are given when a buyer or seller completes a deal. Chat with @XO.MizzSunshine.XO to find out more!