"Bear" Stone Sculpture, By Miskwaa "Bear" Stone Sculpture 2017 I, the seller, commissioned this "Bear" piece from the esteemed Artist and we are both prepared to entitle this one of a kinds, to your possession, for a humble and reasonable sum. I will be listing for sale, more masterpieces from various (still living) Canadian Artists. About the artist: Andrew Bainbridge aka Aandaano is a painter, sculptor, and a traditional drummer and singer who has exhibited his work in Asia, Africa, Europe and America; and, his paintings are part of collections in Germany, France, Netherlands, Canada, United States, Thailand, Poland and Cook Island. He has participated in various exhibits including ‘Bear of the North’ (Group Exhibit with Brian Marion, Toronto City Hall); ‘A Meeting of Two Nations’ (Green Soapstone carving presented to the High Commission for the Republic of South Africa as a gift to President Nelson Mandela during Nelson Mandela’s Farewell Tour, Regina, AB); and, ‘Art up high’ (Vancouver Lookout). Andrew also produced an alternate radio show that focused on First Nation music, culture, opinion and politics; and, he has taught workshops on carving and theory of art. He was the First Nation Ambassador to Poland. Throughout his journey as a ’60’s Scoop’ survivor, Andrew rediscovered his roots through his paintings, and later sculpture. Andrew began to work in the woodland school of art when he was 9, and, around the age of 12, he was flown from Sandy Lake to London Ontario to participate in an exhibit with Daphne Odjig and Alex Simeon Janvier, both part of the ‘Indian Group of Seven’. In 1991, he met Brian Marion, Norval Morrisseau’s apprentice of 10 years, and together, they became heavily involved in First Nation ceremony, travelling throughout all of North America. He apprenticed for 10 years with Brian Marion before continuing on to Asia and Europe where he represented his culture and became an ambassador of Eastern Woodland Art around the world. In Norval’s dying months, Andrew was authenticated by Norval Morisseau as part of the Eastern Woodland School of art. 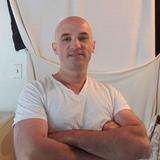 Reviews are given when a buyer or seller completes a deal. Chat with @brickmayhem to find out more!